COVID-19 alert  Stay at home if you feel unwell. If you have a fever, cough and difficulty breathing, seek medical attention and call in advance. 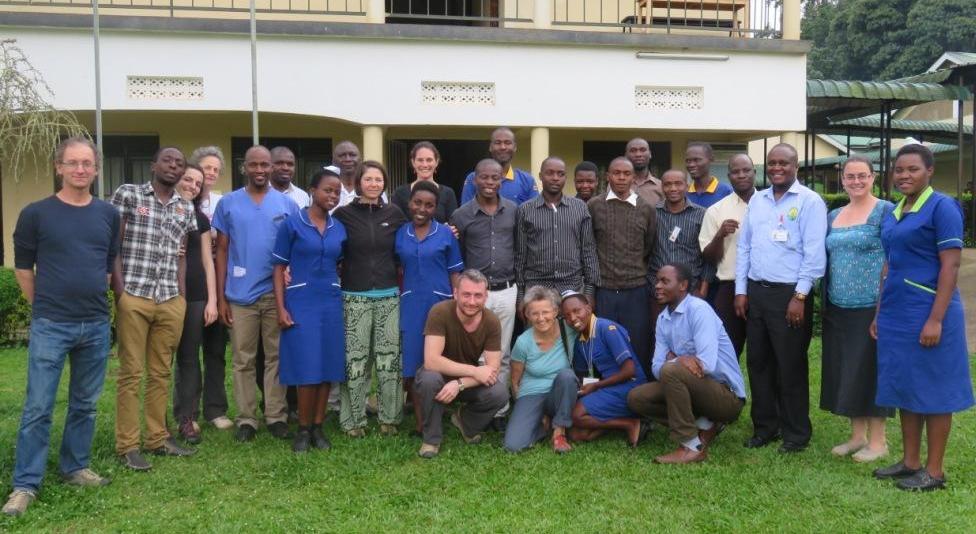 Over 60% of the money needed to run Bwindi Community Hospital comes from contributions from our donors and partners, and none of the work we do in Bwindi would be possible without their generous support. Our supporters trust us to use their donations wisely because we have proven, time and again, that we deliver on our projects and services.

Dr. Forat shares about her first visit to Bwindi

When I first set foot in Bwindi, in November 2007, it was a tourist eager to discover the silverback gorillas. As a doctor, the discovery of a “so-called Health Centre” in the middle of this jungle was intriguing! As a radiologist, finding a container with an Xray table and un ultrasound machine was flabbergasting. The tour of the hospital, provided then by Vicky Holt, the head nurse from England, led me to believe that this was a very well organized institution: there were morning meetings, teaching sessions and a general will of bettering the care brought to patients…

There was no electricity other than energy provided at an enormous price by a diesel generator.

A surgical ward had been built by a Canadian donor: it had hardly any equipment. There were two doctors, Paul Williams in charge of administration and social medicine (several out-patient clinics such as HIV) and another and only Ugandan ,Dr Birungi on the terrain: he acted as internist, surgeon, paediatrician, gynaecologist-obstetrician…and was practically on duty every day….Could I help? Yes, please: radiology and ultrasound were catered for by a radiographer who would travel 3 hours to reach the hospital on Thursdays, market day, and perform all that was needed, or let us say all that could wait.

I decided to come back with the goal of making the hospital independent in these imaging modalities.

I have been coming back since … first as a radiologist with a radiographer to teach ultrasonography and the taking of X-rays, then with teams of medical and paramedical staff.

In ten years the health centre has become a fully pledged hospital (2009) with four doctors, over 100 staff members and is catering for a catchment area of over 100’000 people. A nursing school has also propped up and has already provided the hospital with capable nurses, one of whom we have sponsored through her studies.

Buildings have grown all over the place. Electricity is now mainly provided by a dam but the arrival of the national grid is pending! Surgery is now performed by a fully-pledged gynaecologist-obstetrician, sponsored by one of our colleagues (Professor Verena Geissbühler) and a surgeon whom we have also helped through his post-graduate studies. There is a paediatrician, several clinical officers and an only non-Ugandan doctor, a voluntary British internist.

We have sponsored several nurses for an ultrasound course in Kampala. We have brought over medical equipment in two containers and in our luggage over the years and paid for a new radiology building, a gynaecological consultation room and today the extension of the operating theatre.

Contradicting the experience of several colleagues trying to help in sub-Saharan Africa, our experience with Bwindi Community Hospital is exceptional: the will to learn, the efforts to better themselves, the cordiality and loyalty of most of the staff, the special relations we have built up with some of them in particular, have been the engine making us come back again and again and mobilize all our resources to help this hospital attain its objectives.

We have led several camps : surgical and gynaecological-obstetrical ( Dr Kosta Nassiopoulos , Dr Thomas Witzig and Dr Angel Saurina), starting in the very difficult setting of the absence of general anaesthesia: this was initiated thanks to Dr Pierre- André Vuilleumier, completed then by Dr Le Dinh and Dr Katrin Fluckiger and anaesthesia nurses. One camp also included an urologist, Dr Farshid Fateri, making us realize the enormous need to tend to men too! The operating conditions have drastically improved but there is still very much to do for certain gestures to become routine.

The goal of teaching ultrasound has been reached by on site teaching and sponsoring for a school in Kampala. The management of conventional radiology was assured specifically by M. Samuel Grenier who has been teaching several nurses. M. Philippe Besson, from the Philips Company in Switzerland, has recently blessed us with the repair and reconditioning of the Xray machine brought from Germany in our first container.

One our future goals lies in developing orthopaedics after the experience of two successful camps led by Dr Georges Kohut and Dr Remy Boscacci, a specialist in infectious diseases. Physiotherapy teaching was a novelty. These last camps have also led us to realize the crucial need for a performing laboratory with the offer of microbiology, and hopefully, some cytology, needed for the diagnosis of cancer and in internal medicine.

Today, the dynamics of the hospital managed by Ugandan staff is ongoing. The changes brought to what has become a performing hospital are an encouragement for further help by us, whom they have called the Swiss family! Our ultimate goal, since the beginning, has been to render the hospital independent of foreign staff…as much as possible…Our dream is come back one day….unneeded ! 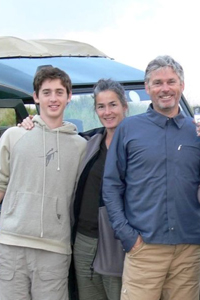 Our family support the work in Bwindi because we can see exactly where our money goes and the Hospital always provides good accountability - whether it be financial reports on the website or stories and photos showing how they use our donations to directly benefit the people in the local area. They never lose focus on the main objective; to prevent disease where it is possible to do so, and to provide excellent treatment services accessible to all, especially the very poorest. We will continue to support them as long as they do this.

When I first visited Bwindi Community Hospital, I was overwhelmed and impressed by its efficiency and organization for such a young hospital in the middle of a remote rain forest with no electricity. One thing, however, did puzzle me. After touring the entire facility, nowhere had I seen a laundry room, an essential component of any hospital. When I inquired, I was told in fact that there wasn’t one. No laundry room in a hospital? How on earth did one ensure that bed linens and towels and scrubs were effectively cleaned?

I was then told that it was the local villagers who washed all of the blankets and sheets on the lawn, by hand, and in cold water. I could not accept this, and consequently decided to contribute funding in order to create a proper hospital laundry room. My money bought washing machines and driers, a pressing table to iron and fold the linens, as well as a constructed storage space for the freshly washed items. A spacious area was appropriated for this new facility and I made sure to donate enough to tile and paint the room, so as to create a clean atmosphere for the new laundry room.

We have supported Bwindi Community Hospital over the last few years because they really deliver – quite literally. Emily and I have five children and we wanted to help women in the Bwindi area to access safer deliveries. When we began our support in 2007 only 35 women gave birth in Bwindi each month, and the labour ward was a small room next to the adult ward. We donated funds for a Maternity ward and labour room that was built to a high standard and with excellent accountability. We were so impressed by the success of our initial investment that we encouraged friends to support the running costs of the unit during the first year of operation.

Now there are more than 100 women giving birth in the safety of the Hospital each month rather than at home, and the Maternity Ward is packed to capacity. Our next step is to help with some of the costs of doubling the size of the ward. We know that Bwindi Community Hospital often struggles to raise the money that it needs to run each year, and highly commend them to any potential supporter. We are proud to be able to work with Bwindi.

Our strong partnerships with organizations around the world have enabled us to provide some of the best health services in Uganda at Bwindi Community Hospital, and we are proud of our achievements that have been made possible with the help of our partners.

For the last 10 years, Dr Forat Sadry has been closely supporting the work at Bwindi Community Hospital. Forat discovered this little health facility lost in the middle of the rainforest and caught by the need, she decided to visit the hospital twice every year for three years where she assisted in the development of the radiology department. She trained and sponsored two midwives in diagnostic ultrasound. In 2010, she coordinated a team of physicians (SWISS Team) from Fribourg to do the first surgical camp in Bwindi. Since then she has organized yearly surgical camps providing specialist surgeries ranging from general surgery, gynaecology to recently complicated orthopaedics for the people in the Bwindi area. Through these surgical camps, these specialists shared knowledge with our hospital staff as a way of maintaining sustainability of these services at Bwindi.

In 2012, Forat and the SWISS Team founded AFRICOMED to insure sustainability of their work at BCH and raise more resources to help improve the health services around the Bwindi area.

AFRICOMED has contributed to the hospital organization by sponsoring and training several staff in radiology, gynaecology, anaesthesiology and general surgery and has sponsored two nurses at Uganda Nursing School Bwindi. They have donated a variety of hospital equipment for the operating room, the gynaecology consultation room as well as ultrasound machines, patient monitors, an X-ray table and a mobile X-ray facility. Laboratory equipment and computers have also been provided for. They have also been responsible for the construction of the radiology building, the creation of a gynaecology office and today the extension of the operating block.

AFRICOMED efforts have also been visible in supporting general hospital running costs such as support of the poorest of the poor for access to chronic care support. Our dream of growing to become a specialist hospital in the region has been supported by the AFRICOMED group.

This project is supported by the Tropical Health & Education Trust (THET) as part of the Health Partnership Scheme, which is funded by the UK Department for International Development (DFID)

Sustain For Life (SFL)has supported the work of Bwindi Community Hospital for several years; paid for the feeding programme at the Hospital for our patients and staff, supported Child Healthcare Access Programme (CHAP) -a programme that enabled all children under the age of five in the Bwindi area to access free healthcare. Sustain For Life supports in partnership with Comic Relief support the Live at Birth project which grew out of (CHAP). They also supported the growing of nutritional and fresh food at the hospital to feed patients and staff.

Rotary International has been a large supporter of the Hospital since it was founded in 2003. Rotary paid for the first building at Bwindi Community Hospital, provided us with our x-ray and ultrasound machines, bought equipment for our Operating Theatre, and recently furnished our Nursing School (Uganda Nursing School Bwindi).

Volcanoes Safaris has provided sponsorship for an overseas fundraising event and promotes the work of Bwindi Community Hospital to its’ clients.

The McCauley Foundation has given annual support to the child health and Surgical program Area at Bwindi Community Hospital.